(copied from the old we heart cats and food blog)

Hi... okay this is the explanation of how to make sticky rice parcels (or Joong).

There are many variations on this recipe, many different things you can put inside the parcels. This one is fairly traditional apart from the fact that it doesn't use the preserved egg (because überjoi doesn't like it) and that it's made by a half-turkish anglo bastard.

I made some of these to take to work when we had a sort of 'cook off' (I work in an office and it gets really boring sometimes). It's probably too much effort to make on a week night and I wouldn't do that again unless I had too... but it was fun.

You need to start prepping for this dish a day in advance - soaking all the dried bits overnight (sticky rice, bamboo leaves and mung beans if you're using them) and marinating the meat. Then the next day it's about 1 hour to boil the leaves, another hour to make the parcels and then 2-3 hours to cook them.

Step 1: Get some things together. 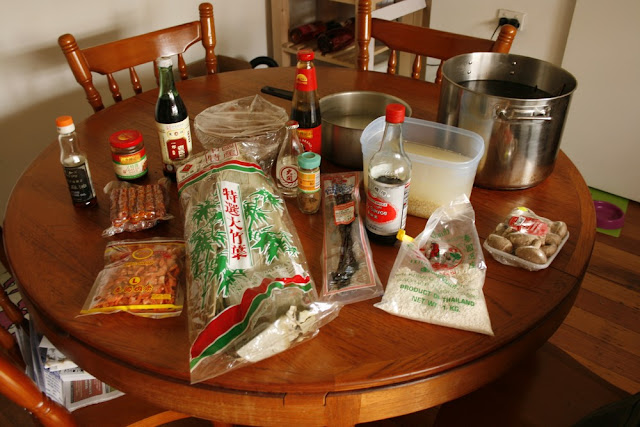 The 'things' I got together in the picture are (from back left):
-Sesame oil
-Char Siu sauce
-Chinese sausage
-Dried Prawn
-The meat (in the bowl at the back)
-Bamboo leaves
-Oyster sauce
-Rice wine vinegar
-Soy sauce
-Saki
-Five spice
-Dried/preserved pork
-Glutinous/sticky rice (soaking in the pot)
-Split mung beans (soaking in the plastic container)
-A pot of water (it was in the picture so I thought I would mention it...)
-Fresh Shitake mushrooms

Ingredients not in the photo:
-Vegetable oil
-2 eggs
-Cooking string

Other than the bamboo leaves and the sticky rice, the rest is extranious. Put what you like into them. But this is how I made them and they turned out pretty good. Not as good as a restaurant but pretty good.

Note: if you look closely at the picture you can see the crap that usually fills our table discreetly pushed onto one of the chairs. To the far right on the floor is a cat bowl. 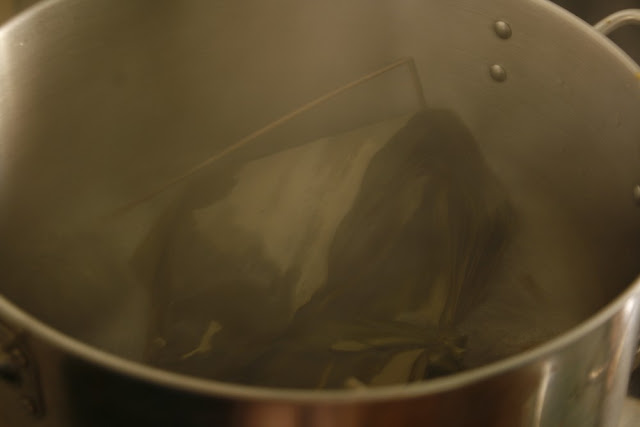 Okay... above is a picture of some leaves in boiling water. I've already mentioned that you will need to soak the sticky rice, the leaves and the mung beans overnight. The next day, before you start wrapping them up, boil some water and throw the bamboo leaves in. Boil them for at least 30 mins. This kills any mold germs that might have been lurking on them. I think bamboo is also dirty because pandas eat it so maybe even boil them for an hour to get rid of any panda germs too.

handy hint: you can put vinegar in the water to make them a bit softer as well. But I find that the leaves are fine after boiling them in just water. 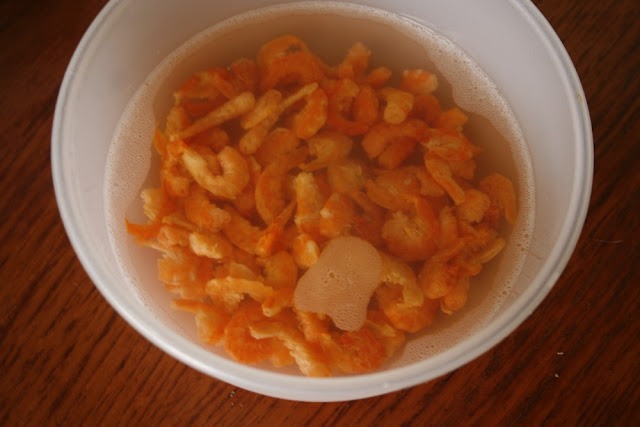 Dried prawn. But I've tried to un-dry them using hot water. It doesn't quite work, but they re-inflate a bit. It takes 15 mins or so to un-dry the prawns. These will go into the parcels. 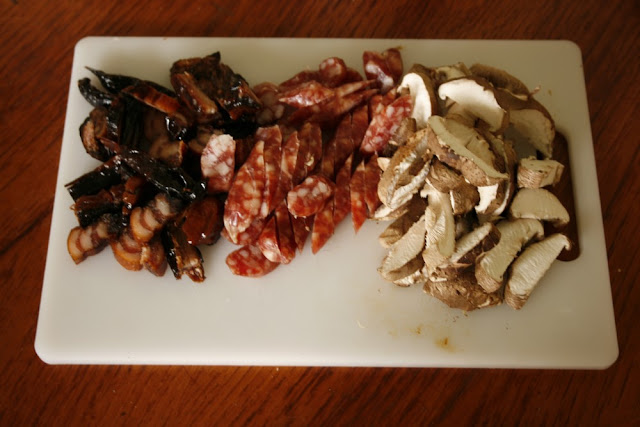 Now I chop up the other bits that are too large to put in whole. In the picture is the preserved pork, the chinese sausage and the fresh shitake mushroom. You don't have to use fresh shitake. It was available so I used it.

I have noticed that there isn't a picture of the meat (überjoi, you didn't take a picture of the meat...). So I'll just tell you what I marinated it in. The Char Siu sauce, oyster sauce and rice wine vinegar. Using the Char Siu sauce is kind of like cheating. It makes things taste good. It works well in this recipe and I'm anglo so I don't need to respect any tradition. Also - I used pork for the meat (from a Yarraville butcher who cut it up especially for me. He was very nice.) but you could easily use Lamb instead. The meat comes out very tender. 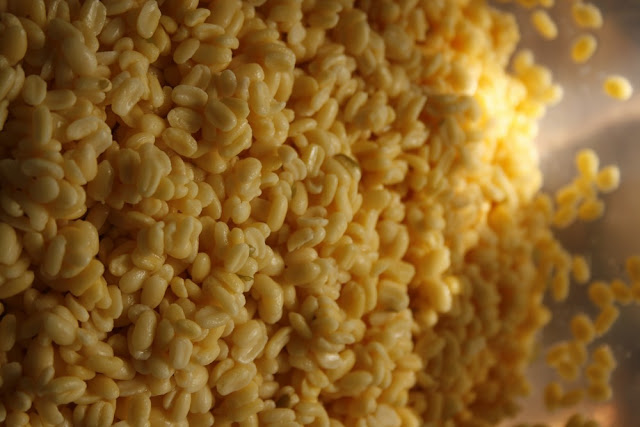 Here are the drained split mung beans. They become a smooth paste in the end product. 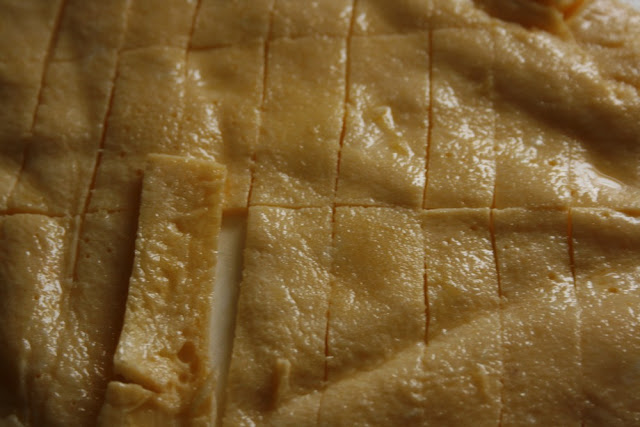 This is an addition that überjoi asked for - some omelette. I just whisked up two eggs and lightly fried them, then sliced them on a chopping board. This is to replace the preserved egg. 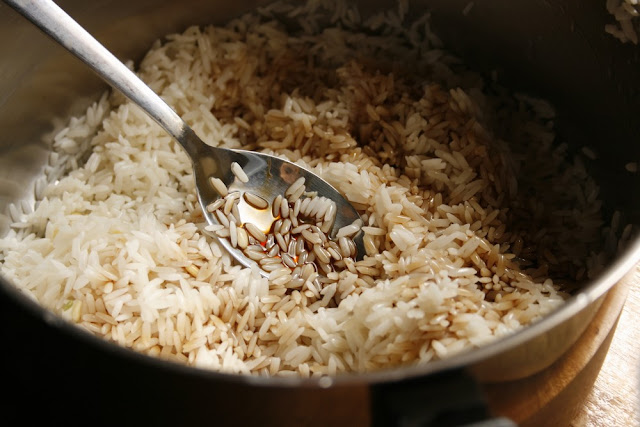 Drain the rice and it looks like this. To add some colour and flavour to the rice, stir through some soy sauce.  Use your own judgement for the amount - I put in a fair amount and it's never been too salty. Also - you can add some oil to the rice at this point. This will help the rice stop sticking to the bamboo leaves when it's cooked. 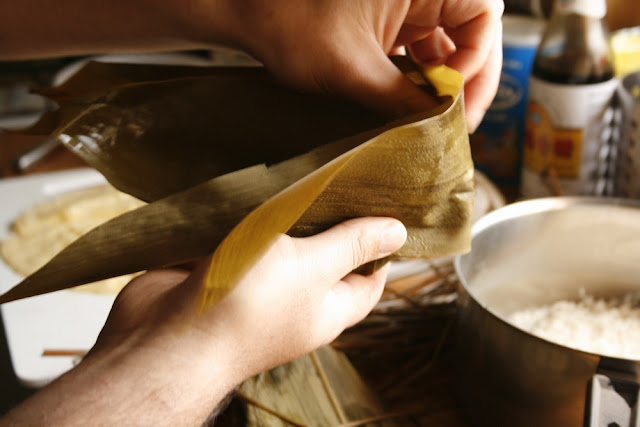 This is the most challenging part... getting the hang of puttingthe leaves together. Youtube it and I'm sure you'll find a video... but I'll try to describe the process:

Firstly, cut some lengths of cooking string before you start.

Take one leaf and fold it round to meet itself, like you're trying to make a cup out of the leaf. The bottom part of the leaf should naturally fold up onto itself.

Sit the folded leaf in the palm of your hand. Fold up the bottom part of the leaf so that you have a firm base on which to pile the rice and other ingredients. Now take a second leaf and wrap it around the back of the first leaf (that's the stage I'm at in the picture above...). Make sure that the 2nd leaf 'catches' the folded over bottom part of the first leaf. This will help to hold it in place. 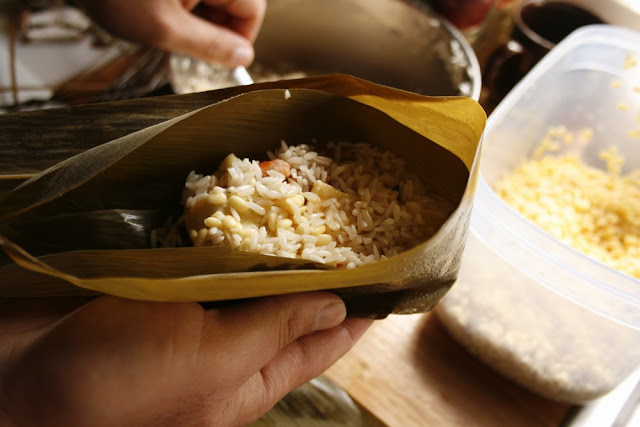 Now you just pile everything into it. Here is the order I followed:

Now, depending on how much of each thing you've put in, you may need to wrap a third leaf around the back of your parcel. Do this if you need to, then fold over the top edges.

Hold the fold down with one hand and take a length of pre-cut cooking string. Place one end under the hand holding down the fold. Then wrap the string tightly around the outside and tie it off. 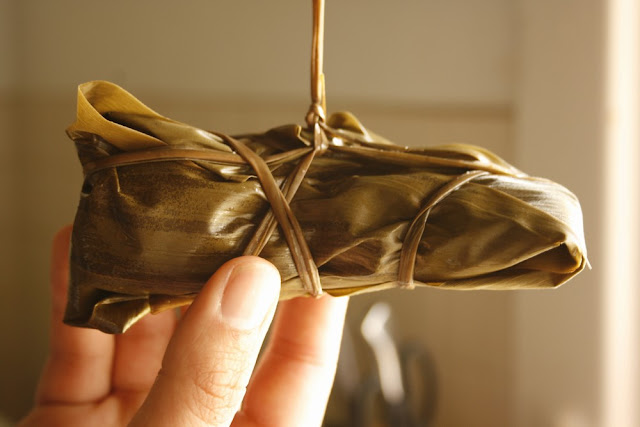 The natural twine I used to wrap up these ones came with the bamboo leaves and makes them look really authentic. 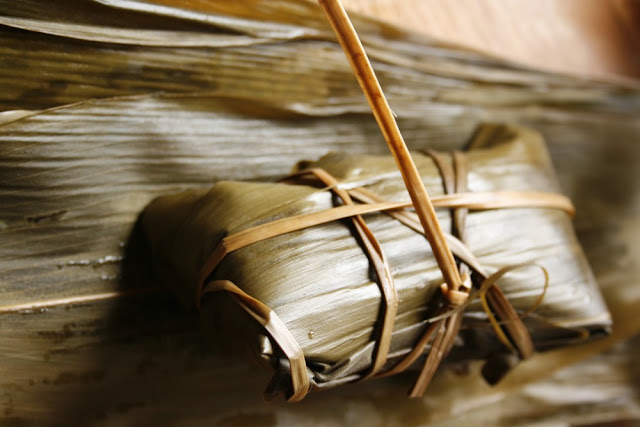 This is an uncooked parcel on a leaf. überjoi likes taking the pretty photos. 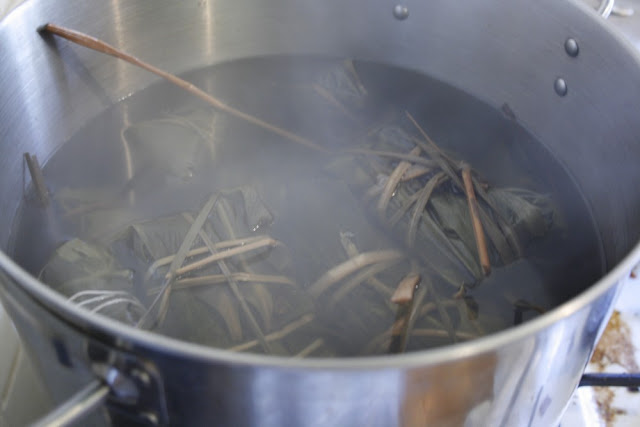 So then you make parcel after parcel until all the ingredients are used up. Then you throw them all in a big pot of boiling water for 2-3 hours. They will be done after two hours. The meat will get more tender if you leave them in there longer.

You will need to add more boiling water after an hour or so. Make sure all the parcels are submerged. 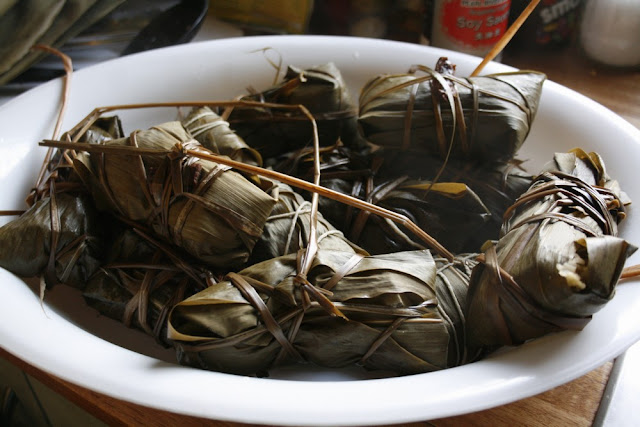 This is what you get at the end... the parcels become firm and all of the flavours have combined through the rice.

You can eat them with some soy dipping sauce, or with sugar or (my preference) just by themselves.

words by pisso | photos by überjoi
Posted by uberjoi at 2:14 PM

Newer Post Home
Subscribe to: Post Comments (Atom)
Disclaimer: All food ratings and reviews are purely based on our own experiences and how we feel about the service, environment, food and quality at the time of visit.