There was a time where I thought to myself that I could be a contestant on Masterchef.  I do all of the cooking at home and somehow I felt that the accumulated experience should eventually manifest itself as some kind of talent in the kitchen.  Maybe it would happen when I was on the show.  I honestly gave some thought to filling out an application and sending it in.  I never had any ideas of seeking fame or anything nor did I think that the show was a path to working in the food industry.  Jesus, dropping out of high school is a path to working in the food industry.  It just takes time and effort.  Ben Shewry didn't become a chef through winning an immunity pin.  Although Scott Fitzgerald did get his start in writing after he got an A for his final Professional Writing assignment.

Anyway, through being painfully shy and also seeing how much god damn technique the contestants now seem to know before getting on the show, I never actually applied.  I remain however, a constant viewer of the show.

I pride myself on guessing who will be up for elimination based on the structure of the opening scene.  Typically you are introduced to three of the contestants in the opening sequence - four if one has a sob story.  But when there are three you can be certain that at least two of them will be up for elimination.  If there is a direct camera shot of someone saying "I'm definitely going home" then you know they're safe.  The other two are fucked.

Another effect that the show has had on me is that it has introduced me to a lot of Aussie chefs.  The problem is that they are all introduced as literally the most amazing, incredible, show-stopping, whatever cooks of their generation.  Now that can't literally be true for all of them can it? Yeah? As George said in a recent episode "Jonathan, you cease to amaze me". Now George was either being a smartarse or simply forgot that the word 'never' was also supposed to be a part of that sentence.

However a cessation of amazement was also how I was starting to feel about some of the guest chefs they were inviting onto the show. Yes they managed to get people like my secret lover David Chang but when some Sydney chef I'd never heard of gets beaten by a contestant I don't particularly like... I figure that maybe they're running out of guests? Maybe these guys should look for another way of getting their own cooking show?

A part of me was starting to forget that these Chef guys and girls were only doing this program to advertise their restaurants.  That they weren't like the contestants, vying for momentary celebrity and some fast cash, they just knew that if they were on the show, their tables were going to be pretty solidly booked for the next few months.  If they even do bookings.

So überjoi tells me that Mark Best is opening a restaurant in Melbourne. In my head I know that he has been awarded best chef and Marque awarded best restaurant in The Age Good Food Guide.  But what immediately comes to mind is when he was angry at one of the finalists in Masterchef.  "Oh the grumpy bald guy" I think. Yup.

überjoi goes there for a mid-week lunch with G and comes away raving to me.  We're on the way to the Kino recently and she points down the side "That's where it is, just so you know." Eventually she gets me there. Flip. Holy flip. 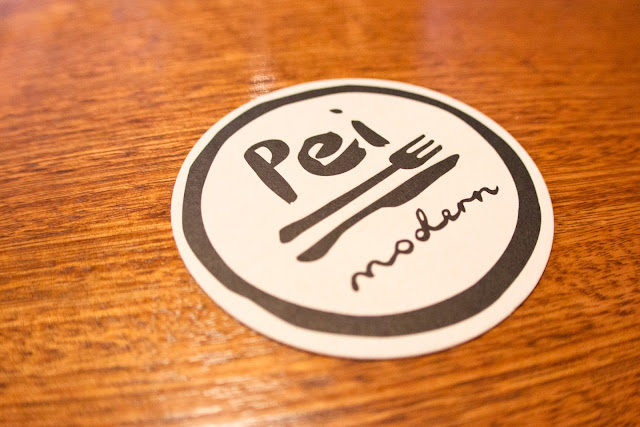 They're playing Rick Astley as we are seated and I ask the waitress if Rick is actually in the restaurant as I can't think of any other reason for the song being played. She asks if we want it turned off.  This probably isn't how our initial conversation at Pei Modern was supposed to go but there you are. With our consent, Rick continued to not give him/her up and we were introduced to the menu.

They do a set $50 ‘set progressive lunch’ which is what überjoi had the first time she ate at Pei. This time it's a la carte and I have real trouble deciding.  It all sounds pretty amazing.  I eventually ask for a recommendation between two dishes. I ask if should I get the rabbit or the d- "The rabbit." our waitress replies before I can finish. "It's my favourite."


The photos do not lie. The food is as delicious as it is pretty.


There are other quirky elements aside from the music – the bread served in a napkin and your special knife which is used throughout the meal.  It is a pretty awesome knife. If they told me it was stained with the blood of the protein I was eating, that would be even better. Neither of these things are actually that quirky but I found they made the atmosphere a little more casual.  That and the fact that there is a bar menu.  You can just go to Pei for drinks and a snack.  Somewhat different from how I imagine an evening at Marque.

The menu changes frequently according to their website.  The bar items we ordered were both so very tasty.  Anchovy and parmesan, wonder-twinning the Umami factor.  It was as if those Shapes adverts were true and you could actually see the flavours on your biscuit.  Their nod to yakitori with the skewered hearts with harrisa were less full flavoured in comparison to the anchovy but yes of course they were.  To be honest we should have eaten the hearts first. They were "cooked to perfection" to steal from the Masterchef.  These hearts sank quickly down into my belly.


The Thunder Road beer was helping me enjoy the meal as was the steady stream of 80's hits coming from the sound system.  The theme from Beverley Hills Cop accompanied our entrees of steak tartare (originally a Mongolian dish invented by the Tartar tribes, we learned at Dandelion) and the Almond Gaspacho which überjoi was ordering for the second time. The tartare was served with house made salted potato chips.  I have been enjoying steak tartare – to me the texture of the chopped raw meat is actually preferable to eating a cooked steak.  The dish here was pretty classic and did not disappoint.


The mains were where it came to a head.  I have never eaten rabbit that tasted like this.  I have cooked rabbit before, mainly in stews and usually for about five to six hours.  I'm used to the rabbit just falling apart as I touch it with some parts tasting like a dry sponge. The rabbit backstraps in this dish had the texture of perfectly a cooked chicken breast.  Slightly firm but completely moist.  The taste was slightly gamey and absolutely delicious.  I do not know how they cooked the meat that well. The dark sweetness of the meat sauce/gravy the rabbit was served with was matched perfectly with the jerusalem artichokes, which were so sweet by themselves and beautifully prepared.  I could eat that dish right now. Simply amazing cooking. It made the meal for me.  überjoi's fish and mussels were also wonderful, with these huge, plump mussels hiding under the seaweed green sauce.


The desserts rounded the meal off well, with the caramelised tomato stuffed with dried fruit and nuts not feeling savoury at all. The star anise ice cream didn't have that lingering licorice aftertaste and was really made to be eaten with the tomato to add a sweet edge.  I have never had Sauternes before so I don't know if it is usually that liqueur thick and sweet or if it had been reduced to a syrup consistency to top off the custard.  It was a very distinct flavour and I could imagine someone who loved dessert wine coming to Pei just for that dish. überjoi really ordered it for the crustolli I believe and wasn't let down by that aspect of it either.


Well Pei Modern, this is the end of the review.  It all comes down to your restaurant and the dish you cooked today.

Pei Modern you are safe, you can continue cooking. Pisso I'm sorry your rabbit is awful, you're obviously drunk and you will not be Australia's next Masterchef.  Hugs, I spout BS in a car for a bit, Katy Perry plays and the TV is quickly turned off before even a single frame of Lara Bingle is allowed to hit the screen.

Spoonfuls of Wanderlust delivered to your inbox: