Moving house is shit. Actually losing twenty dollars is shit.  Moving house is the emotional equivalent of telling someone you love them only to then have them laugh derisively then start making out with the person you hate most in the world then returning home to find that your dog has died from explosive diarrhoea whilst being trapped in your bedroom and Arrested Development has been cancelled again.

We recently received a letter from our estate agents saying that we have sixty days to vacate, so this has been weighing on my mind.

The worst move we had was when we first moved to Footscray.  We had spent three years in our previous house and over that time had accumulated a lot of detritus.  The hallway cupboard alone when unpacked, seemed to possess tardis like dimensions as box after box was filled with cat toys, sewing equipment, towels, eskies, a large bicycle pump as well as a maddening number of still unopened boxes from the last time we moved.

The day prior to the move I came down with the flu.  The day of the move it rained.  Not heavy rain, just enough to keep me constantly cold and wet without having an excuse to stop.  It was that move that made me buy a kindle.  After the twelfth trip back to the van loading up boxes of books I had either read or had no real intention of ever reading, I was firmly on the side of the digital revolution.

The house we were moving into was one we had chosen in a spur of the moment decision.  The real estate agent had been late to the viewing.  We had almost left. It was a six pm showing and it was already dark.  A few other people had stuck around to view the property but we were the last to leave.  The agent was nice to us.  We had pre-filled applications and were excited about the place after our three minute viewing.  The owner had moved interstate after a bad divorce.  For some reason the wood floored living room was filled with row after row of shining red and silver gum ball machines.  Each one sparkling clean and completely empty. They were obviously something to do with the business of the owner and it was weirdly funny at the time.  Looking back the omen of these empty shells devoid of any joy giving properties should have been more obvious. We submitted our applications and left unaware that the mould was already starting to push its way back through the fresh coat of paint that had just been applied to the walls.

We moved into the house over a period of three days.  Trip after trip as more useless junk came pouring out of the built-in storage it had occupied for the past three years.  I remember walking into the new place to find überjoi quietly crying in one empty corner.  The gum ball machines were gone now.  They had taken everything they owned and left in its place, for whatever reason there would be to do this, their final unflushed faeces floating in the toilet.  In the light of day the place looked different - run down and dirty.  Still, it was ours and we now filled its halls with our own collected excreta.

After three days we were tired and cold.  My flu was fighting the adrenaline in my system and starting to win. Late on the second day hunger had won and we ate Hungry Jacks burgers on the floor of our new gum ball free living room while I attempted construction of an Ikea flat pack. We were run down and worn down.  We had moved from a house we loved to one we were very quickly learning to hate.  We were now noticing the peeling paint, the water stains on the outside of the back door.  Signs and portents of what was to come.  In all truthfulness what I had noticed was that there was an avocado tree out the back and this was overriding any unpleasantness in the house but überjoi was not enjoying the new environs.

We managed to get all of our belongings in to the new place.  We set up the bed and slept as though we had been anaesthetised. The next day we had to get back to the old place and clean out every dirty corner and hiding place we had just emptied.  We were spent and we were broken.  Auto pilot had already been switched on and was the only way this was going to work.  There was only one thing that could help us finish this job.  One small reward, one island of hope in this sea of dirt and cold and god damn Ikea instruction manuals.

I hold open the door and überjoi walks through.  It's cool and still raining outside so the windows of Pho Tam are steaming up through the consumption of hot noodle soup by its patrons.  We are greeted and sat down at our usual table.  We're each handed a worn brown plastic menu even though we already know exactly what we are ordering.

Pho Tam's menu is more extensive that it has any right to be.  The range of beef and chicken noodle soups are complimented by a host of rice dishes, stews, vermicelli salads and other specialty noodle soups.  Over the years we have tried the majority of their menu and seriously, everything has been good.  überjoi loves their broken rice.  Often I will get the diced beef or vermicelli with pork chop and spring rolls.  Their iced Vietnamese coffee is mandatory. Still, their Pho is the standard and is the reason we are here today.  They prepare two different broths - one for their beef and one for their chicken.  They care about the preparation of both of these and they care about the accompaniments.  Bean sprouts and herbs, lemon and chilli, pickled slices of onion are placed in small bowls on the table.  All fresh and crisp, generous amounts of all.  The bowls of Pho arrive and it is such a regular sight, such a familiar, welcoming smell that we can for a short while forget that we are moving into a cold, damp, falling down house.  Forget that we have a day of scrubbing floors and cleaning walls ahead of us.  As I swallow the first spoon of chicken broth I feel a warmth spread through my chest.  überjoi is starting to smile again.  I sigh internally and my thoughts start to clear.  We can make this work.  We will clean and unpack and make the best of this new house.  Things will be okay.  This chicken soup is fucking amazing. 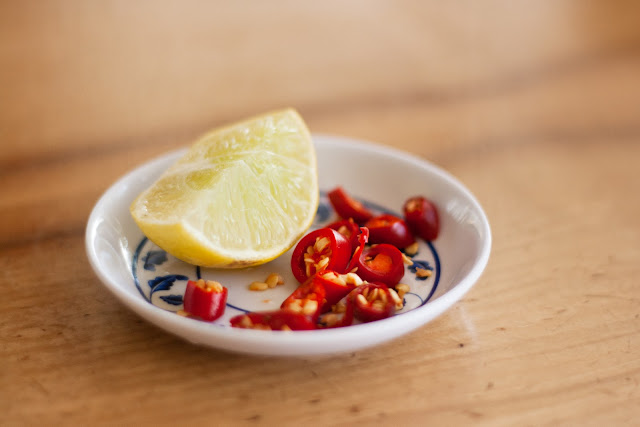 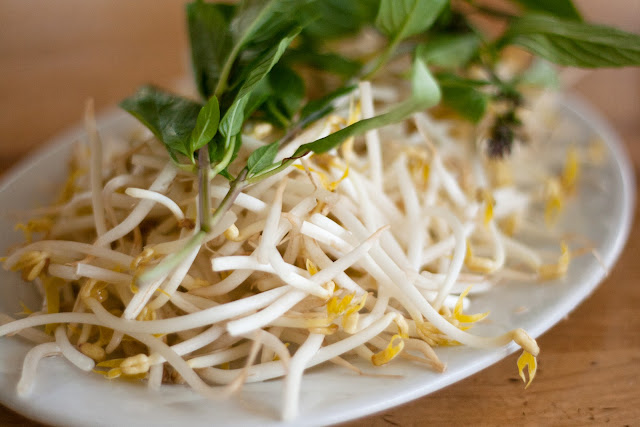 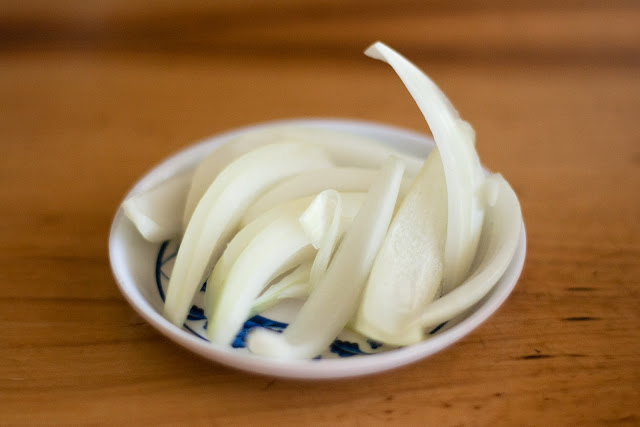 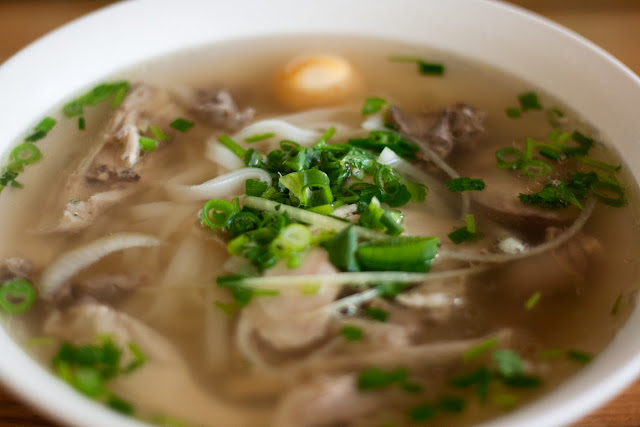 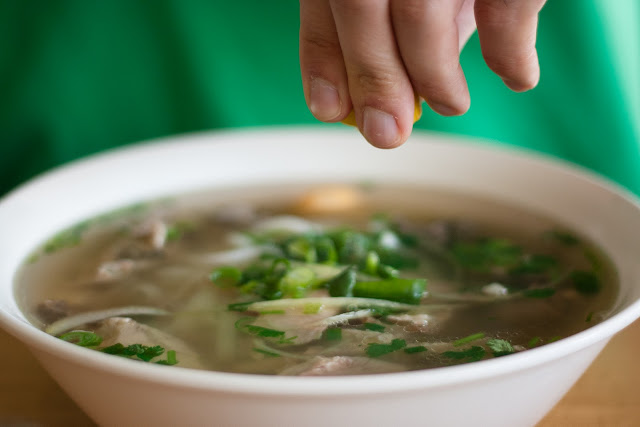 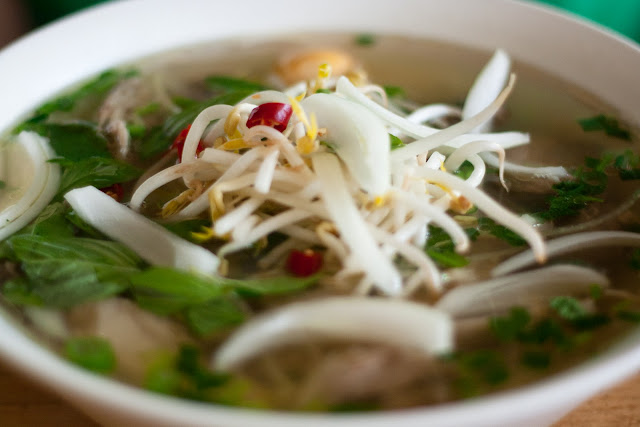 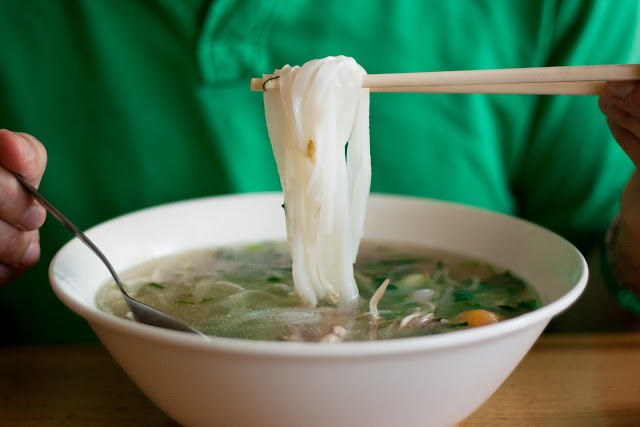 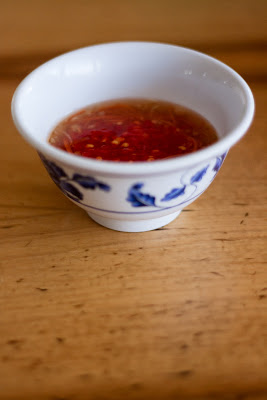 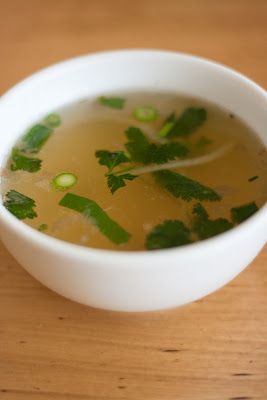 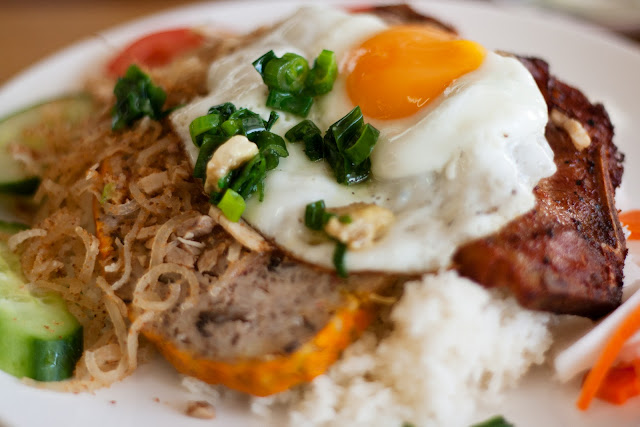