For the religious set, Sunday is a day of worship.  For the rest, it’s a day of recovery.  For a recent Sunday lunch companion who had only got home at 4am, Sunday was more of a continuation of Saturday.  For people like me who don’t do the church thing and don’t really stay up past 11pm unless time has gotten away from them whilst reading Harry Potter, Sundays are just a collection of spare hours that I’m not really sure what to do with.  So with that in mind, three hours spent on Sunday lunch is a pretty good use of my time.

Cutler & Co. on Gertrude St hold a Sunday set lunch menu for $75 per head.  For that you get a series of Appetizers, Entrée’s, a Main and Dessert all made from fresh, seasonal ingredients.  I haven’t had the pleasure of their regular dinner menu however I would hazard to guess that the lunch menu differs from any of their usual dishes.

überjoi chose to begin the day with a bloody.  I randomly picked a white wine and hoped for the best.  Then came the bread – on this particular Sunday some house baked focaccia and sourdough.  The problem with bread is that I would happily eat a meal of just bread and butter, so I try to avoid too much of it at restaurants.  überjoi and G ended up taking extra focaccia when it was offered, which proved to be their downfall later on.

The appetizers and entrees for the set menu are brought out as a series of share plates.  There are no choices to be made for the first few courses, although they will cater to any particular requests or allergies.

The appetizers for our meal veered towards the sea, with oysters (raw, served with lemon), house smoked trout on rye and also some land-dwelling olives.  Outside of being deep fried and served in bread, I really don’t see what cooking an oyster does to improve it. So the raw oyster with lemon was a win for me.  The trout (and cream cheese and caviar) on a rye crisp bread were beautifully presented and a nice start to the meal.  To me, not mentioning the caviar in the menu description reminded me of that West Wing episode where Toby loses a bet and has to introduce himself to everyone with the words “I’m Toby Zeigler. I work at the White House”.  A dude mentions to him “You know, it would be cooler if you just let people find that out for themselves”.  You see ‘trout and rye’ on the menu and when it turns up - oh they accidentally tipped caviar all over it.  So yeah it’s cooler when you just find that out for yourself.

I’m overstating it but I don’t get to eat caviar very much.


The entrées started with marinated organic broccoli and a cold mussel dish then were followed by roasted pumpkin with almonds (and I think some roasted pumpkin seeds) and a large slice of buffalo milk haloumi.

Each dish was quite simple in terms of execution – everything cooked well, had a great mix of flavours.  The dishes didn’t seem to really go together as a whole, but I was happy to eat all of them.  I think it was more a case of – these things are good right now so we’re going to serve them to you.  The pumpkin stood out for me.  G said the pumpkin and haloumi were probably supposed to be eaten together and that’s probably correct – but the pumpkin was great by itself.


There were three options for main – roast beef, braised fish or a lamb shoulder “for two”. überjoi and G decided to go for the lamb shoulder and I went for the fish because I’m a 14 year old girl on a diet and I hate myself.  Or because I like fish.  There is no picture of it so I could tell you anything and you would have to believe it.  It was actually just pieces of fish cooked in a tomato sauce.  It was okay but something I could have easily knocked up at home.

I imagine the lamb that überjoi and G’s lamb shoulder came from to have been some kind of giant, king of the paddock baby sheep as it was a massive piece of meat.  This serving for two was easily enough for four people, and with that extra bread taking up valuable space in their insides, there was a significant amount of meat left on the plate when they were finished.  The kind of place that doesn’t even bother to mention caviar isn’t a place you feel comfortable asking for a doggy bag from. 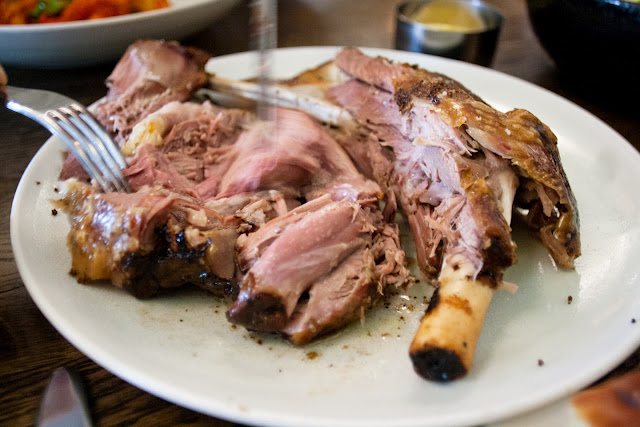 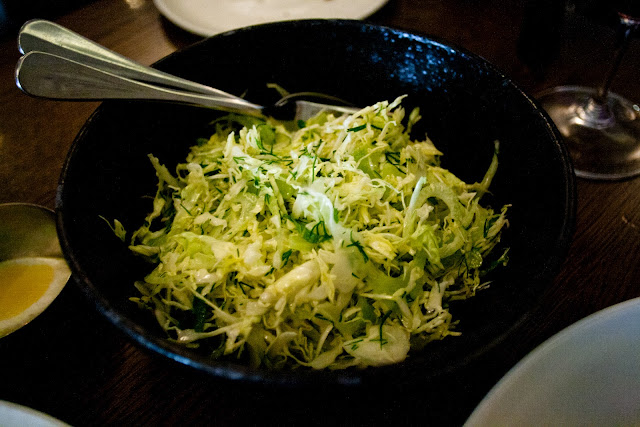 Awesome of awesomes, three diners and three desserts once again, so one of each was ordered and consumed.  The stilton wasn’t as strong as I thought it would be – it was creamy with a small kick but you weren’t afraid to keep talking to each other in close proximity after eating it.

The middle dessert was ‘subtle’ and my inner 14 year old girl told me just to eat that one, but there was suet pudding sitting right next to it so I stabbed my inner 14 year old in the heart and ate some fat cake instead. The suet pudding was easily the best dessert there (note: if you are reading this in a restaurant where suet pudding is offered but isn’t the best dessert on the menu, leave right now as I am probably on my way there with a flame thrower and instructions to ‘isolate the infected’).

So all up there was an interesting mix of way too much food laid out over the course of three hours.  If I went back to Cutler and Co. I would go for their regular menu so I could compare.  The food for their Sunday lunch was very simply prepared – I guess this ‘paid respect’ to their ingredients but it also seemed to lack the complexity that I was expecting.  Other than the presentation I feel like I could have prepared the majority of what we ate at home pretty easily.  That being said, everything was pretty tasty and I would probably go back. 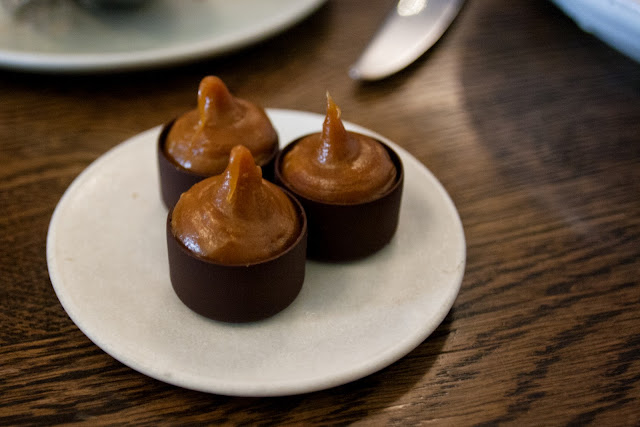 Words by pisso | Images by überjoi.