We went to Sydney and ate ramen.  Twice in two days.  It wasn’t nearly enough. So what is so good about ramen anyway?  Why do people who visit Japan come back and complain about the broth and the noodle and the meat and the general standard of product available in Australia?  Or do other people not do that? Is that just me being a dick, trying to conjure the image of myself as a worldly traveller?

A regular pastime of mine is Google searching “best ramen in Melbourne”. I do this every couple of weeks, with the hope of a new search result.  There is Kokoro.  Ipondo.  Ramen Ya.  That’s about it so far.  Some people say Momotaro is good but either we visited there on a bad day or people are lying because it was not the best ramen ever.

There is so much great food in Melbourne – so many cuisines and high quality restaurants.  Possibly too many.  However the sad fact I live with everyday is that there is no really, actually good ramen in Melbourne.  There is some quite tasty ramen and there is one that does the egg properly and the noodle is generally pretty good at the three places listed above.  But there is a reason I still Google search.  There is a goal we have yet to reach.

In Japan bad ramen shops don’t exist because they simply don’t survive.  In Japan the ramen situation is akin to a virus attacking its host organism.  The weak cells are killed off and the virus multiplies, spreads, destroying anything that fails to compete. In Japan chain restaurants are seen as a good thing.  It is the reputation of the brand that makes people go to these franchises, as all locations serve the same menu and provide the same level of quality of the originating shop. Just as McDonalds has a standard level of quality across all of its stores, so do the chain ramen restaurants in Japan. The difference being McDonalds base standard of ‘we generally attempt to not make you sick on purpose’ versus the Japan standard of ‘we will kill our families if your noodle is less than perfect.’  There are still the standard one-off restaurants that serve amazing ramen as well – in my forced analogy these are cells that have built up antibodies and are resistant to the virus, but the fact is you can walk down any street, see a particular franchise and know exactly what you are going to get.  So the point is – there is good ramen everywhere in Japan.  It is so commonly good that it is taken for granted.  Just knowing this makes me want to cry for Melbourne.

The main problem in Melbourne is the stock.  There are several different types of ramen stock and different combinations of these are used to create different menu items.  Shoyu is the soy based broth.  There are broths with Miso added. There are fish stocks used as well.  Then there is Tonkotsu ramen which uses a thick pork broth made from boiling masses of pork bones for hours and hours.  There are additions of some rendered chicken fat or butter when the stock is added to the bowl.  You can mix and combine different broths to make different dishes.

Tonkotsu broth is labour and time intensive, taking 6-8 hours of preparation.  It smells a bit while you’re making it (although not in the end product). It is also the greatest noodle soup stock in the world.  This thick collagen laden pork soup has such a deep well of flavour it is hard to describe.  Different restaurants have their own small variation to the recipe and the addition of a small amount of fish stock or chicken fat or soy or butter changes the flavour yet again.  The thick soup coats the noodles, flavouring them as you pull them towards your slack, drooling jaw.  The complex nature of the stock transforms the dish in front of you from just a noodle soup into something else. Ramen.

In Melbourne you get Shoyu mostly.  Sometimes there will be a miso ramen on the menu.  Tonkotsu broth in Melbourne is hard to find and generally disappointing.  I order ramen in Melbourne and I dream of what it could be like.  People generally hate me.

The first time we went to Sydney überjoi had done her research and had read about a non-descript food court formed from a ramshackle collection of restaurants serving different asian cuisines.  Sounds awesome, right? What she had actually heard about was a ramen shop.  There is a food court ramen shop where the dude trained in Japan.  He makes tonkotsu broth daily.  Actually twice a day.  They have limited servings of a pork rib ramen.  They have a menu of over 15 different combinations of soup and toppings.  Just writing this is making me angry/hungry.  Gumshara Ramen is the definition of non-descript with hand written signs and fading pictures of their dishes. But the first time we were up there I couldn’t help but notice that there were a few people hanging around, waiting for 11am and for them to start taking orders.  I also couldn’t help noticing that the majority of these people were people talking to each other in Japanese.

The first time we ate there I instantly knew that I could never again side with Melbourne in the eternal Sydney vs. Melbourne debate.  They had won.  The egg was soft, the noodle was firm, chewy, exactly what you wanted it to be.  The tonkotsu stock was just amazing.  This was all I ever wanted my ramen to be.

So it became a reason to go to Sydney.  We would formulate excuses, reasons we needed to go there.

“Demetri Martin is playing at the Opera House!”
“Isn’t he also playing Melbourne?”
“Yes, but Ramen.”

“Jetstar is having a sale!”
“We could go eat Ramen!”

And then most recently:
“It’s your birthday! Surprise, we’re having Ramen!”

überjoi, in her continuing research of places to eat when we make up excuses to go to Sydney, had discovered a new Ramen joint.  So we went to Sydney and had ramen twice in two days.

Ryo’s Noodles is the new addition to the Sydney Google search and so it was first on the list.  We get to Sydney and it is pouring with rain.  We check into our hotel and ask the receptionist where the best way to get to North Shore.  “What for?” she asks.  We tell her we’re going there for lunch. “You’re travelling all the way there for lunch?” is her response.  I swallow my immediate reply of “We’re wasting precious ramen time bitch just tell us where the station is”, and let her spit out the directions to the station.

We take the train to the closest station, pull out our umbrellas and push on through the rain.  Ryo’s Noodles website claims that they’re open until 4pm, however we got there at 2:30 and were the last people seated.  They were full when we arrived and turned away a few people behind us.  We immediately decide to order too much food.  This is the right decision. 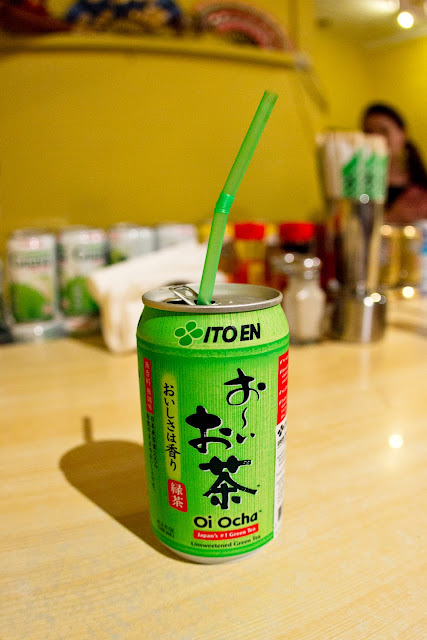 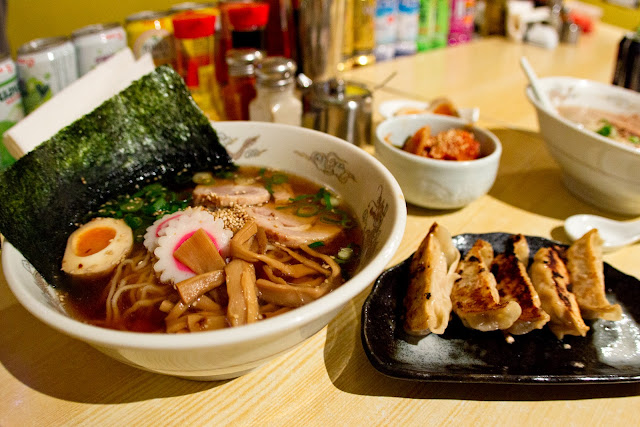 The food was as good as it looks.  Tonkotsu broth here was much thinner than what Gumshara produce but it was really flavoursome.  I know that part of my enjoyment was being extremely hungry and wet but the food was good.  Gyoza and karaage were tasty also.  What struck me was how many additional menu items were written on the walls.  There would be a lot to try here and some specialty items that would take a few visits to find.

In all Ryo’s noodles was excellent food and excellent value but I know that this was impacted by my hunger at the time and having walked through the rain for 30 minutes to get there.  I would happily spend a week gaining weight getting to know their full menu. 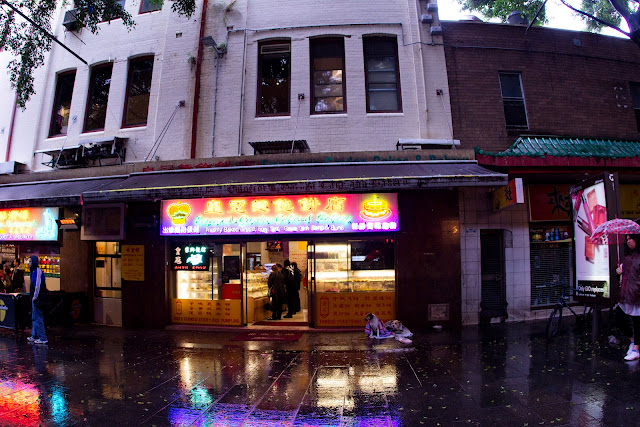 That evening we went to Tetsuya’s, which will be relayed in another post.  The next day we had ramen number 2: Gumshara.


After being quite pleasantly surprised at Ryo’s the day before I wasn’t sure what to expect at Gumshara.  It had been quite a while since we had been here and I was no longer sure what was real and what was imagined in terms of how good their soup was.  I tried something new this time – the Tonkotsu and fish broth noodle soup.  Usually I go straight for the special pork rib because they only make a limited number each day and... well why not.  In the interest of science I moved on to another item from their menu. 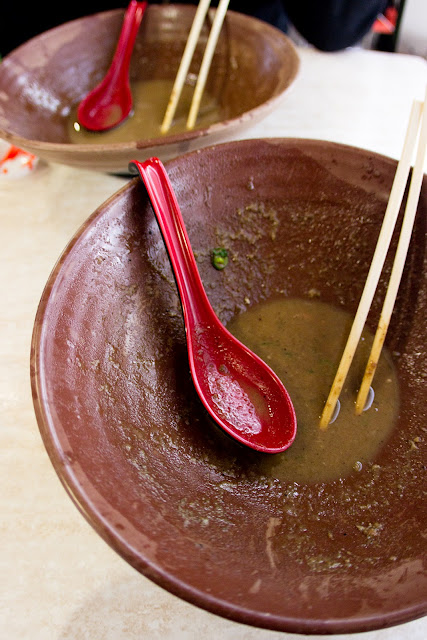 Sitting down to two different bowls in two days makes it so abundantly clear what a huge range of variance there can be between good and great.  Ryo’s was good.  Really good.  Gumshara is really something else.  In a way I’m glad I don’t live in Sydney because living that close to Gumshara would be a problem for me.  I am obsessed with looking for mushrooms but my respite from that is that there are only certain times of the year that mushrooms are around.  If I was able to visit Gumshara every day, I probably would.  At least a few times a week.  No doubt there are people who already do this.  My birthday celebrations would be held annually in a dingy food court.  I would make decisions about the location of my home and place of work based on ease of access to this pork soup dispensary.  It would take over a section of my brain that may be needed for more important things like operating heavy machinery or knowing when it’s socially required to emit a false laugh or remembering the names of all the Masterchef contestants.

So – there is good ramen and great ramen in Sydney.  They are both worth trying and both make me happy.  Eating at these places will ruin you for other ramen but hey, then you can become a ramen snob.  Then you can be a dick like me.